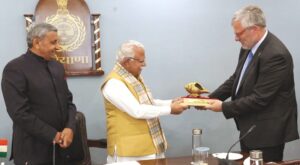 Ambassador of Israel to India, Naor Gilon met Haryana Chief Minister, Manohar Lal at his office to discuss possibilities to strengthen Research, Education, Health Services, Aeronautics, other than their current investment agreements with the State in the Agriculture sector.

During the meeting, Naor Gilon not only lauded Haryana for successfully running four excellence centres at various places across the State but also said that Israel will set up many such projects in the future in different states of India and most of the projects will be in Haryana as the state’s production capacity, efficiency and atmosphere are favourable.

“Out of the total 80 per cent investment done by Israel in India, around 50 per cent is invested in Haryana. Now Israel aims to explore more investment possibilities in Haryana in sectors other than Agriculture. Now we are moving towards setting up Village of Excellence in Haryana,” said Naor Gilon.

Naor Gilon held extensive discussions with the Chief Minister identifying various development avenues between Haryana and Israel. He especially sought cooperation from the Haryana Government in exploring investment possibilities in telemedicine, since Israel is very strong in this sector.

Speaking on the occasion, the Chief Minister said that as almost 50 per cent of the land is less productive hence possibilities to promote fisheries business can be explored. Micro-irrigation can be another area of investment, he said.

Meanwhile, the Chief Minister while evincing keen interest in the Ambu bike, an ambulance-equipped two-wheeler service operational in Jerusalem directed the officers concerned to explore possibilities of tie-ups with the NGO running the service and invite them to visit Haryana.

He said that out of various models of business like B2B; G2G, B2G etc, we believe in the H2H model of working that is ‘Heart to Heart’ approach of collaboration.

Earlier, Agriculture and Farmers’ Welfare Minister, Sh. J.P Dalal said that as Haryana is the landlocked state but has developed inland fish culture, established more than 2000 fish water ponds and expects Haryana to be one of the biggest producers of prawns, hence possibilities can be explored in setting up centre of modern fish culture technologies in the State.

Earlier, while welcoming Dr. Sumita Misra said that this is been more than a decade-long vibrant relationship. We in Haryana are optimistic and believe that this relationship would certainly continue to groom and continue to explore various other sectors for new partnership opportunities.

“Skill training and joint programmes for training and collaboration of MATC and HTI might open the future prospects of exchanging knowledge and technologies. Besides this, our horticulture university may explore seed production programme with Israel,” she added.